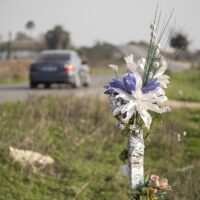 A serious two-vehicle crash in Brush Prairie killed three people on a recent Friday afternoon. The victims of the tragic accident included several children who were being transported by the drivers of the vehicles involved. Learn more about the Washington car crash below and contact our dedicated Vancouver personal injury lawyer for help after a traffic accident in Oregon or Washington State.

Clark County sheriff’s deputies and firefighters responded to reports of a crash on Highway 503 at around 3:47 p.m. on a recent Friday afternoon. According to a spokesperson for the Washington State Patrol, a 41-year-old woman from Battle Ground was heading northbound in a Volkswagen Golf on the highway. At around the 16200 block of Northeast 117th Avenue, a little north of where the road crosses Salmon Creek, the woman attempted to pass traffic on the left. She moved into oncoming traffic in the southbound lane of the highway, where she crashed head-on into a blue 2007 Honda Odyssey minivan. The crash was so powerful that it threw the cars into opposite sides of the road, and the engine of one of the vehicles landed in the middle of the highway.

The minivan was being driven by a 31-year-old Brush Prairie woman. The minivan was also carrying three children. According to reports, both drivers were killed in the crash. Responders initially ordered a Life Flight helicopter to respond to the scene, but they later canceled the order. Two of the children, a seven-year-old boy and a three-year-old girl, were taken to Legacy Emanuel Medical Center in Portland for treatment of serious injuries. Devastatingly, a third child, a three-year-old girl also riding in the minivan, was killed in the crash. The girl was the daughter of the driver of the minivan, who also died as a result.

Stretch of Road Ranks High for Collisions in Southwest Washington

The stretch of Highway 503 where the crash occurred has already been identified by the Washington State Department of Transportation as one of the 20 highest collision spots on Southwest Washington highways. WSDOT has a project in the works to improve the safety of the road by eliminating crossover collisions and reducing the risk of left-turn crashes between intersections. Although distracted driving and other reckless, aggressive or negligent driving is to blame in most car accidents, government entities have been held liable in the past for crashes caused by dangerous or defective road designs. It’s even possible that more than one factor and more than one party are at fault in a particular auto accident.

For dedicated, effective, and compassionate help pursuing a personal injury or wrongful death claim after a motor vehicle crash in Portland, Vancouver, or elsewhere throughout Oregon and Washington, contact Vancouver auto accident lawyer John Lutgens for a no-cost consultation at 360-693-2119.