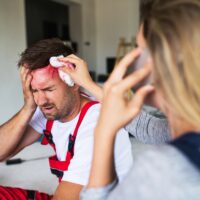 Traumatic brain injury (TBI) occurs when a person suffers a sudden, intense blow to the head, sending the brain bouncing around the skull. TBIs include concussions, brain contusions, penetrating brain injuries (when an object pierces the skull), and anoxic brain injury (damage suffered when oxygen is unable to reach the brain). The risks of TBI are severe, including impairment to mental functioning, disability, coma, and death. See below to learn about the most common events leading to impact-based TBI. Call a seasoned Portland and Vancouver personal injury lawyer if you have been hurt by someone else’s negligence in Oregon or Washington State.

Car accidents, truck accidents, motorcycle crashes, bicycle crashes, and pedestrian accidents are all-too-common. Drivers and passengers alike often suffer TBIs in vehicle accidents when they strike their heads on a seat, dashboard, window, pavement, sidewalk, or even an airbag. Airbags reduce the head trauma caused by a car crash, but they are still extremely firm; some form of TBI is still possible when crashing at a high speed. Pedestrians, motorcyclists, and bike riders are likely to suffer serious head trauma when struck by other vehicles, either at the point of contact with the vehicle or when hitting the ground after being struck.

Slip and falls send more Americans to the emergency room every year than just about any other type of traumatic accident. Slip and falls make up around 15 percent of all job-related injuries, send over 8 million people to the emergency room across the country each year, and lead to tens of thousands of deaths annually. TBIs are among the most dangerous and, unfortunately, most common injuries caused by slips, trips, and falls. Most people do not wear a helmet in public, at home, or in the workplace (outside of construction). When someone falls, they are likely to strike their head on another surface such as a countertop or the ground. That impact can lead to any number of TBI-related complications.

Construction workers face any number of dangerous hazards daily. They risk slip & falls just like everyone else–caused by wet surfaces, loose wires, discarded objects, etc.–but with the added dangers of heavy machinery, sharp objects, and working on an elevated surface. Construction workers are also exposed to rolling, falling, or flying objects, including building materials, tools, and equipment, any of which can lead to a severe TBI. Workers may fall from scaffolding, ladders, windows, roofs, or other high places as well. TBI is extremely common among construction workers, leading to serious injuries and fatalities.

Sports, especially contact sports, are a common source of head injury. Football players and professional boxers are especially susceptible to TBI given the constant, repeated blows to the head these athletes are likely to suffer. Other types of athletes, including baseball players, soccer players, hockey players, and basketball players, may also experience TBI when losing their footing, fouled by another player, or struck in the head with a ball, bat, or stick.

In addition to accidental impact, TBIs are often caused by intentional acts of violence. Tackling someone to the ground, punching, kicking, or striking them in the head with an object, or throwing an object at someone’s head is likely to cause some form of TBI. The more intense the impact, the more serious the injury likely to result.

For seasoned and successful help pursuing a personal injury or wrongful death claim after a negligence-based injury in Portland, Vancouver, or elsewhere throughout Oregon and Washington, contact Vancouver personal injury lawyer John Lutgens for a no-cost consultation at 360-693-2119.