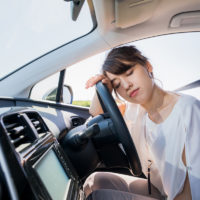 Drunk driving and distracted driving are known to be dangerous driving behaviors which receive (appropriately) public disapproval and attention from law enforcement, but until recently, few of us have considered the serious dangers of driving while highly fatigued. A team of researchers with the AAA Foundation for Traffic Safety has recently published a study revealing the threat posed by driving drowsy.

Video footage of drivers allows study of drowsiness behind the wheel

The recent study was conducted using data gathered during the Second Strategic Highway Research Program Naturalistic Driving Study. This study involved over 3,500 participating drivers who agreed to be videotaped while driving, allowing researchers to study any number of driving behaviors and their relationship to causing crashes. The AAA Foundation research team specifically isolated six seconds of footage of drivers immediately before they were involved in a crash. The team slowed down the footage and used a scientifically-supported method of determining whether a person was drowsy; specifically, how much of the six seconds the driver spent with their eyes closed.

Official federal statistics promulgated by the National Highway Traffic Safety Administration state that between 1% and 2% of annual fatal crashes are caused by drowsy driving. That said, road safety experts have speculated that the true rate is higher but that drowsiness is difficult to determine. The AAA Foundation study found the rate of drowsiness among drivers involved in a crash to be closer to 9.5% of all crashes, and in up to 10.8% of crashes where physical injury, major property damage, or airbag deployment were involved.

With this greater understanding of the influence of drowsiness on crash rates, victims of crashes may benefit from introducing evidence of the at-fault driver’s fatigue in a car accident claim for damages. This could involve testimony from the driver about their sleep habits, or evidence of their overloaded work schedule or social calendar. Evidence could also include eyewitness testimony describing the driver moving erratically or nodding off while driving. Contact an experienced personal injury attorney for more information.

If you’ve been hurt in a crash in Washington or northern Oregon, get help seeking the money damages you may be entitled to receive by contacting the dedicated and effective Vancouver personal injury lawyer John Lutgens for a free consultation at 360-693-2119.