How Prescription Medication Can Lead To A DUI 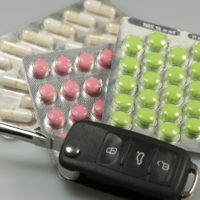 For most responsible drivers, the idea of getting a DUI sounds completely out of the question. You understand how dangerous it is to drive under the influence of alcohol or drugs, and would never under any circumstances choose to drive while using either substance. What most people don’t realize, however, is that you can be arrested for driving under the influence of medications– even seemingly harmless prescription medications.

You Don’t Have To Be Drunk To Get a DUI

Driving “Under the Influence” is meant to be vague so that it can cover anything that would cause you to be impaired. In addition to alcohol and recreational drugs, just being drowsy from your allergy medication can get you arrested. A lot of prescription drugs have side-effects like dizziness, fatigue, and blurred vision, which can all impair your judgment and cause you to drive poorly.

While there’s no doubt you want to avoid an arrest, it’s important to remember that there could be a much worse scenario. If a medication you take changes your ability to think clearly, stay alert, or physically react, you risk the possibility of a catastrophic accident every time you drive.

While many reports suggest a nationwide decrease in the number of drunk driving incidents in recent years, one statistic shows that around 16% of drivers on the road have some sort of judgment-impairing substance in their system while driving. This statistic is cause not only for you to be more cautious about driving when taking medications, but also a warning to lookout for reckless drivers around you and never hesitate to report incidents where you believe other drivers may be under the influence.

You should also beware of the effects of mixing medications that are harmless to take by themselves. Drug interactions can cause unexpected impairments. If you take Tylenol, for instance, and then take an asthma medication, the two drugs could cause increased drowsiness, depending on the dose of each medication.

Understand the way your medications affect you. If you start taking a new medication, be aware if it is likely to make you sleepy or dizzy. Always be clear about how different drugs interact with each other and be cautious about taking any new meds unless you know how it will interact with your current prescriptions. When in doubt, have a designated driver – just as you would if you planned on drinking.

If you’re in need of a criminal defense attorney in SW Washington, contact the Law Offices of John Lutgens today. Call 360-693-2119 or click here to send us an email.