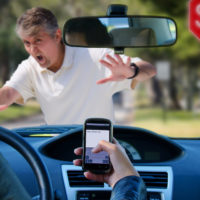 Distracted driving has a major effect on roadway safety. While official National Highway Traffic Safety Administration (NHTSA) statistics from recent years had placed the rate of fatal accidents caused by any kind of distracted driving at around 10%, the National Safety Council places the rate of cell-phone-related distracted crashes at 26%. According to statistics on traffic deaths in Washington, the number of fatal injuries caused by distracted driving jumped from 130 in 2014 to 171 in 2015, and constituted nearly 33% of all traffic deaths statewide. In an effort to curb these senseless deaths, lawmakers in Washington have developed a plan to crack down on distracted driving by banning nearly all uses of a handheld device while Washington drivers are behind the wheel.

Two lawmakers, Rep. Jessyn Farrell of Seattle and Sen. Ann Rivers of La Center, are spearheading the bill they’re calling the “Driving Under the Influence of Electronics Act.” The lawmakers are seeking to limit even more forms of cellphone use than are banned under existing law, and to intensify Washington state’s penalties for driving while distracted. “If this 30 percent spike doesn’t send a message that what we’re doing now isn’t working, I don’t know what will,” said Sen. Rivers.

Currently, drivers can expect to get a ticket for $124 for being caught driving while reading or writing a text or talking on their phone without a hands-free device. The ticket does not get reported to insurance companies or official court records. Rivers and Farrell will push for the new law to increase the penalty to an amount closer to $350, and to mandate that the offenses be reported to insurers (resulting in higher insurance rates) and included on official court records. The lawmakers do not intend to bar phones if drivers use a hands-free method, such as a bluetooth device, but instead plan to add rules that would prohibit drivers from picking up their phones to use applications such as Facebook, Snapchat, or Twitter which are not currently banned under the law. The legislators are still in discussion over whether mounting phones to a dashboard will be permitted under the new law.

Some safety groups think that even the measures proposed by the Washington legislators are not enough to control the surge in distracted driving. The National Safety Council explained in a report that the risks involved in distracted driving extend beyond simply having manual contact with a phone, noting that research shows no safety benefit from using hands-free devices. “There is only so much the brain can do at one time,” the report stated. Evidence of driving while distracted can be valuable in a claim for money damages after a crash, offering proof that a driver could not have been driving responsibly if they were not fully engaged in the task of driving.

If you have been injured in a crash with a distracted or negligent driver in Washington, contact the talented and compassionate Vancouver personal injury lawyer John Lutgens for a consultation on your case, at 360-693-2119.