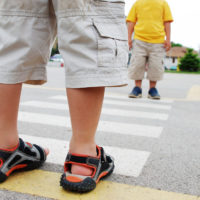 Your kids may be in charge of getting themselves home from a nearby bus stop alone if you’re unable to meet them. Like most parents, you probably spent time instructing your children in how to cross the street safely before you let them go off on their own. Despite this careful instruction, new research shows that young children may need longer than previously believed to develop the ability to safely gauge the flow of traffic.

According to one study by the National Center for Statistics and Analysis, 8,000 children were injured and 207 killed in vehicle-pedestrian related incidents in 2014. Researchers at the University of Iowa undertook research examining how children cross the street, and whether their still-forming brains were capable of accurately assessing oncoming traffic. The researchers included study participants aged 6, 8, 10, 12, and 14 in the study. The participants would enter a highly-realistic 3-D simulation of a residential street crossing, which they were instructed to cross when it appeared safe to do so. The simulated cars traveled at 25 mph in a single lane of traffic. According to the study, 6-year-olds were injured 8% of the time while crossing the street. Eight-year-olds were hit 6% of the time, and 10-year-olds were hit 5% of the time. While 14-year-olds were not hit at all, 12-year-olds were hit 2% of the time.

The researchers explained that people must perform two tasks when crossing the street: Gauging the speed of oncoming traffic and the length of the gap between passing cars, and timing their step from the curb into the street to occur immediately after the gap in traffic opens up. The youngest children had some difficulty with both tasks, but especially the latter task. The researchers found that young children lacked the motor skills necessary to time their step to occur immediately after the first car had passed, to give them the most time to cross before the second car reached them.

In order to make younger children safer when crossing the street, parents are encouraged to teach their kids to cross at marked crosswalks if at all possible. When crosswalks aren’t available, children must learn to be patient when waiting for a gap in traffic, and taught to choose a larger gap between cars than might be necessary for an older child or adult. Finally, when certain streets near popular bus stops or in proximity to a school have a great deal of child pedestrian traffic but lack a crosswalk, parents should speak to their local government offices about the need for a marked crosswalk or traffic signal to keep kids safe.

If you or your child has been injured in a Washington pedestrian accident, contact the experienced and knowledgeable Vancouver personal injury attorney John Lutgens for a consultation at 360-693-2119.