Pedestrian Accidents on the Rise in 2018 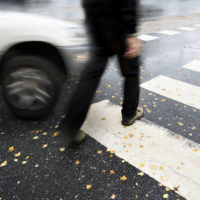 An alarming number of pedestrian accidents have caused several deaths and injuries in Portland recently. On October 12, a Portland woman was killed in a hit-and-run crash as she was crossing SE Division Street near 138th. A car slammed into her, drove away, and then she was struck again by a drunk driver while she was lying in the street. And only the day before, three pedestrian accidents occurred in the Portland area. A man was hit by a semi-truck while crossing Burnside Street in Gresham. He was taken to the hospital with life-threatening injuries. Another man was hit and killed by a car on northbound I-5 in Washington. Finally, a pedestrian in a marked crosswalk was seriously hurt when he was hit by a car turning onto East Burnside Street. That’s four pedestrian accidents in the span of 48 hours. Learn why pedestrian accidents are on the rise in 2018 as GSHA sheds light on the issue.

Why Are Pedestrian Accidents on the Rise?

The GHSA links (although not definitively) two notable factors to the increase in pedestrian accidents in certain states and nationwide: (1) the growing number of state and local governments that have decriminalized the recreational use of marijuana, which can impair judgment and reaction time for all road users, and (2) the increasing use of smartphones, which are a significant source of distracted driving regardless of travel mode. The seven states—including Oregon and Washington—that legalized recreational marijuana use between 2012 and 2016 reported a collective 16.4% increase in pedestrian fatalities in the first six months of 2017, and the National Electronic Injury Surveillance database shows the number of cellphone-related Emergency visits is increasing in parallel with the prevalence of cellphone use in the United States.