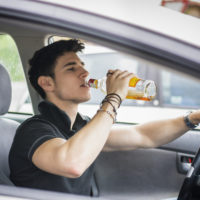 Few moments are as scary to a parent as when their teenage child earns their driver’s license and begins going out to social events on their own. Unfortunately, statistics on the rates of teen injury and death in traffic accidents show that this fear is not unfounded. According to a new study published in the medical journal Pediatrics, however, fewer teens are killed on the road when local laws impose a greater number of restrictions on both teen driving and on alcohol sale and consumption, generally. Read on to learn about the ways that fatality rates are affected by these laws.

Dr. Scott Hadland is a researcher at the Boston Medical Center, where he also works as a specialist in adolescent and addiction medicine. Dr. Hadland has found that about half of all fatalities of teenagers in traffic accidents involve alcohol. According to Dr. Hadland, the risks posed by the interaction of teens and alcohol isn’t limited to the teens themselves. “The vast majority of people under the age of 21 dying in car crashes are dying in evenings, on weekends. It’s a high risk time to be out on the road.”

In an effort to determine what approaches work, and which don’t, when it comes to fighting teen drinking and driving, Dr. Hadland conducted a study of how a locality’s network of laws on driving and alcohol affected the teen motor vehicle accident fatality rate. These collections of laws and policies included those governing teen drivers directly, like curfews and graduated driver’s licenses, but also included laws restricting how liquor sales were taxed, and how alcohol could be advertised.

According to Dr. Hadland’s findings, the more restrictions there were on teen driving and alcohol, the fewer alcohol-related traffic deaths of teens there were in that locality. Rather than just one law making the difference, Dr. Hadland noted, “it’s really the collection of them all that seems to be effective.” Dr. Kirsten Bechtel of the Yale School of Medicine, when asked to respond to Dr. Hadland’s findings, offered support for his conclusion, stating that “restricting access to the opportunity for unsafe behavior through legislation has been shown to be a successful public health approach to reducing preventable injuries and deaths.”

Dr. Tim Naimi, one of Dr. Hadland’s co-authors, pointed out that it isn’t only laws that change the ways teens view alcohol use and abuse. “What parents do — the way they drink and whether they drink at all — is more important than what they might say about alcohol.” Dr. Naimi explained that the good example set by parents can change a teen’s outlook on drinking, adding, “a lot more than genetics runs in families.”

If you or a loved one have been injured in an accident with a negligent, careless, or drunk driver in Washington, contact the compassionate and effective Vancouver personal injury lawyer John Lutgens for a consultation, at 360-693-2119.