Drowsy Driving Can Have Deadly Effects 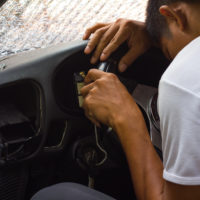 While you may not always be lucky enough to get them, you probably know that experts recommend that the average person needs eight hours of sleep a night for optimal health. It turns out that this amount of rest may not just be desirable for your personal well-being; it could have a life-or-death impact on your abilities as a driver. A recent study has illustrated the degree that driver safety is influenced by how much sleep that a driver did (or didn’t) get the night before.

The study, conducted by the AAA Foundation for Traffic safety, examined the crash rate of drivers to learn whether it varied based on the amount of sleep the driver had gotten the night before. The researchers used data gathered by a nationwide survey of accidents conducted by the National Highway Traffic Safety Administration, which included data on serious car crashes where investigators interviewed the drivers and took note of the evident causes of the crash. The drivers were asked how much sleep they had gotten in the past 24 hours, how much sleep they got on average, and whether their sleep patterns had recently changed. The AAA Foundation researchers compared the answers given by drivers who appeared to have been at fault in the accident with the answers given by non-negligent drivers who had been the victims of crashes.

If you’ve been injured in a car crash in Washington caused by a drowsy or otherwise negligent driver, find out if you have a claim for money damages for your injuries by contacting the skilled and effective Vancouver personal injury lawyer John Lutgens for a consultation, at 360-693-2119.