Washington Expands Categories of People Who Can Sue for Wrongful Death 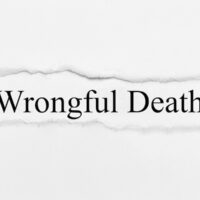 An unexpected death in the family can be a jarring and emotionally traumatizing experience, even in the best possible circumstances.  If the decedent was financially responsible for others, even more complications and fiscal problems could arise.  Survivors of a family member killed by negligence or recklessness have the right to bring personal injury and wrongful death claims against the at-fault parties, but the types of claims and damages available, as well as the categories of people who can bring such claims, are limited by state law.  Washington State recently expanded the types of people who can sue for wrongful death in a move that strengthens protections for family members of deceased accident victims.

A wrongful death claim is a civil lawsuit brought against an at-fault party who wrongfully causes the death of a person.  Wrongful death claims may be available, for example, after someone is killed in a car accident.

In Washington State, there are generally two types of claims that can be brought after an accidental death:  a “survival action” and a “wrongful death” claim.  The distinction is important because the types of damages available and the potential plaintiffs differ.  Survival actions essentially involve appointing a personal representative for the estate of the deceased to bring the personal injury action that the deceased could have brought had they survived.  Available damages include things like medical expenses and lost wages, as well as damages such as pain and suffering experienced prior to death.  Survival actions do not include damages suffered by family members, or costs like shortened life or loss of enjoyment of life.

Wrongful death claims, on the other hand, allow beneficiaries of the deceased to sue for any pecuniary losses related to the death of a relative.  The wrongful death plaintiff can seek economic harm such as loss of familial income, as well as less tangible damages on their own behalf, such as loss of the victim’s support, love, and companionship.

Changes in the law

Before the new law was passed, two types of beneficiaries could bring wrongful death claims:

Secondary beneficiaries were only allowed to recover for wrongful death if there were no primary beneficiaries, and if they both (a) were financially dependent on the deceased, and (b) lived in the United States at the time of death.  Parents of a minor child could bring a claim only if they regularly contributed to the child’s support, and all parents would collect a single claim to be divided among them.

Under the new law, individuals who may bring wrongful death claims include the same two sets of beneficiaries, but now secondary beneficiaries may recover even if they either lived outside the U.S. at the time of death or did not depend on the decedent financially.  Parents of a minor child may now recover so long as they can show “significant involvement” of an emotional, psychological, or financial nature in the child’s life at any time “reasonably near” the time of the accident.  Each parent also may now bring their own, separate claim, rather than sharing and dividing a single claim.  The new law also makes it explicit that all beneficiaries may recover economic and noneconomic damages.

For dedicated, passionate, and effective help pursuing a wrongful death claim after an accident in Portland, Vancouver, or elsewhere throughout Oregon and Washington, contact personal injury lawyer John Lutgens for a free consultation at 360-693-2119.